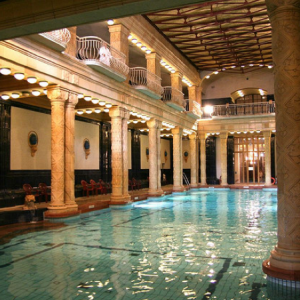 Budapest is a unique city in more than one ways. For those who love spa and wellness, it is unique for being the only large city in the world, which abounds in fountains of healing water. 70 million liters of 21-78 Celsius warm thermal water spring forth daily from its 118 natural thermal springs.

The Art Nouveau style Danubius Hotel Gellért first opened its doors in 1918, and has long been an iconic Budapest landmark that has even featured in Hollywood films. Its stately building, at the foot of the Gellért hill, also houses the world-famous Gellért Baths, which include an outdoor pool with the original wave-generating device installed in 1927.

No wonder, that as early as in 1934, Budapest was awarded the supreme title “Spa City”. Three years later, the first International Balneological Congress was organised, and the seat of the International Balneological Association was established at the Gellért Thermal Bath in Budapest. The Congress reasoned with the following words: “…no city can put forward a stronger claim to this than Budapest. Endowed by nature with a wonderful generosity of excellent thermal waters and unrivalled natural beauty; additionally, its high medical professionalism, the excellent equipment of its healing institutions, the high level of scientific research, makes Budapest the optimum choice for international affairs of balneology to be handled from here…”

The Gellért Bath and Hotel itself was built in the preceding decades, and opened its doors in 1918. Outdoor pools were added later on, and today it combines modern technical developments with rich historical heritage.

Rest and relaxation, luxurious leisure, expect nothing less from the most prestigious Spa of Budapest